I have pretty much given up on having a web presence,
I will keep releasing music under various names,
such as...
-Son of Salami
-Salami Junior
-Salami JR
-Senior Salami
-Salami and Son
- Citizen Slice
-JPS
-JP Slice
-Joey Pizza Slice
-JPS Agresta
-Joey Agresta 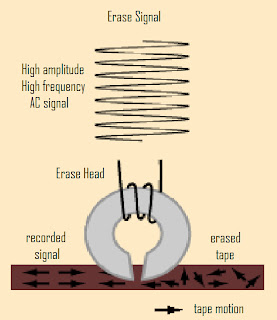 for my son of salami project, i record all my music on eraser headless portable tape recorders. when you remove the erase head from a tape recorder it no longer erases but instead layers the new audio track onto the old one, much like multiple exposures on a camera.
however with this technique you cannot hear the music that being recorded over as you record, you cannot mix or adjust volumes of individual dubs and you cannot erase. the sounds will become more compressed and sometimes quieter the more audio you dubs you add in limited space of music. i've also noticed stereo anomalies that i can't really explain, but i have learnt that slightly hold fast forward can create a warbling effect that when recording will sometimes shift the sound to the right side of the stereo only. also if you hold down fast forward completely while recording you can record audio that can only be heard properly while playing in fast forward and backwards in rewind. when played in normal speed the audio sounds like big bass rumbles, this is fun trick for leaving subliminal messages in songs.
to locate an erase head on a portable tape recorder
hit eject to open the tape door, then stick your finger in to the to left corner and you should feel a small metal lever, while holding that down press record and play. up should pop two heads, the smaller one to the left is the erase head. remove it however you want, i always use a steak knife.

"ranted and raved about unrequited love over a cringe-wor­thy cas­sette mix of sludgy sounds, while lurch­ing around the stage in a wheelchair he didn’t need"
-the Boston Globe

"exploits the explicit out of a modified portable tape machine to construct freakish multilayered mutants; portions of the purest keyboard-led pop palpating with a warped mind and a pig bladder heart."

"we feel you, salami."
- rolling stone
Email ThisBlogThis!Share to TwitterShare to FacebookShare to Pinterest
Home
Subscribe to: Posts (Atom)